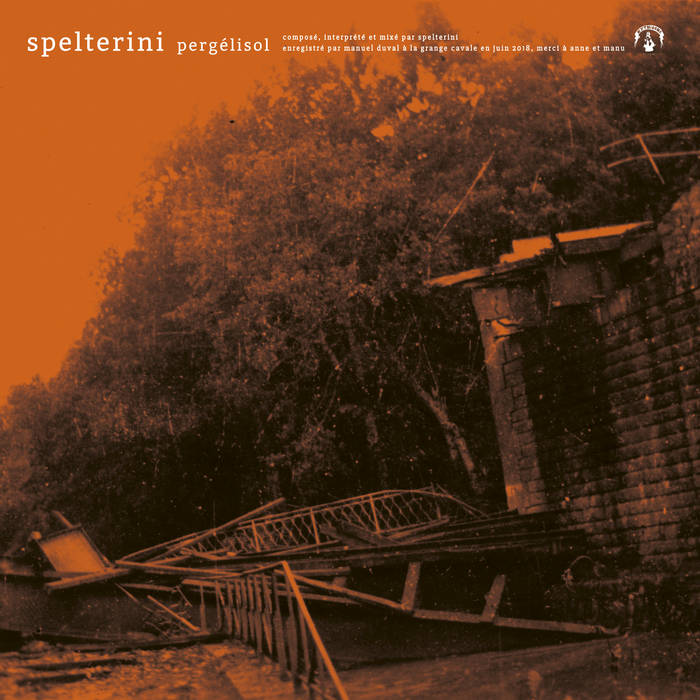 When two ex-Chausse Trappe and two members of Papier Tigre and La Colonie de Vacances got together mid-2017 to try out some of Meriadeg Orgebin’s ideas, it soon became the band Spelterini.
Named after the tightrope artist Maria Spelterini, their music is always on the edge, tense yet flexible. They make their own fabric based on minimalism, drones, feedback and every accident, break or any other part is captured by the band and fuels the creative process, reenacting each
performance and enhancing their direct approach.
The band’s first release, Pergélisol / Chorémanie, is released on September 20th, 2019 on Kythibong records in France (vinyl LP / DL) and Mascarpone Discos in Spain (cassette tape).
Two sides, two pieces, two moments, two methods. A «split» between two facets of the band.
Born from the first year of in camera rehearsals, ‘Pergélisol’ comes from Spelterini’s live repertoire.
This version was captured on the spot by Manuel Duval at La Grange cavale in June 2018.
‘Chorémanie’ is a collage game made up of oppositions, repetitions and break-ups, whose composition is purely the result of the recording process.
The two tracks fulfill themselves between uptight post-punk, repetitive music and ambient drone,
somewhere between This Heat, Swans and Eliane Radigue.
The album was mixed by Spelterini between late 2018 and early 2019.